For the first time ever, a public exhibition of images from the
Railyard as it is today. Exhibition Dates: Sept. 15-Nov. 14, 2011 At the Kimo Theater Gallery 423 Central Ave. NW
Albuquerque, NM Gallery Hours can be found listed on the Kimo Gallery site (505) 768-3522 (for gallery info)
On the home page, the most recent posts will appear first; scrolling down will take you to the older posts.

I have been to the Rail Yard five times now. The first trip was in December 2008-with permission. It was with a few other friends and we had the place to ourselves save for a few homeless guys living there with their dogs.

I was awestruck IMMEDIATELY.

It takes your breath away even with its age and years of neglect with tons of pigeon poop and feathers everywhere.

What is is about this place that so captivates me?  The immensity. The architecture. All the windows. All the light spilling in. It felt like a cathedral. 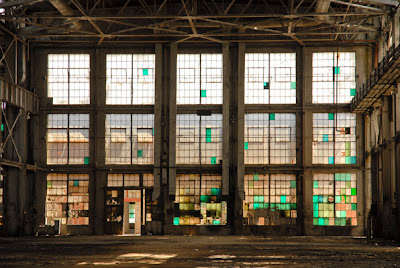 How can you NOT be affected by this? The light changes constantly. It becomes a game of cat and mouse if you are a photographer. There is so much to take in while hunting it down. 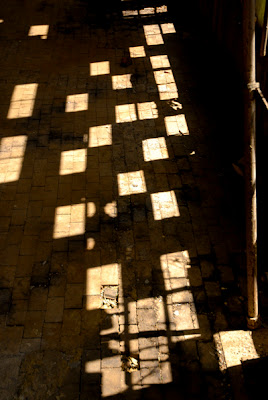 The relationship with the ever changing light is like a tango. Captivating and seductive.
Or, is it the graffiti? Some of it is downright ugly, but some of it speaks of such creativity. 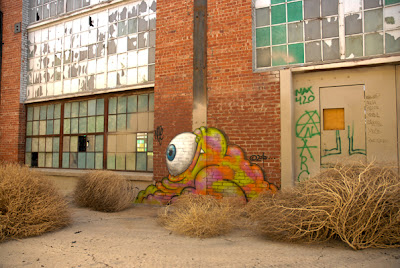 I can't deny my fascination with this. Or, is it the stories that can be told from all that worked there? 400 people three shifts a day is a lot of people in the day and age when it was going full seam ahead (no pun intended). 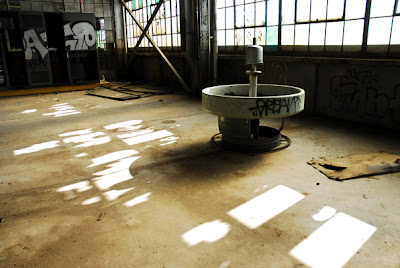 This is one of many wash stands that I saw on the second floor. Working on the steam engines was a very greasy job as I imagine it was with the diesel too. I can also see the groups of men gathered around this washbasin getting ready to call it a day and trying to get as much of the grease off of them as possible. 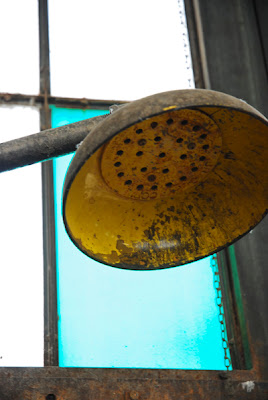 And maybe some were so greasy that they needed to shower off. Perhaps another aspect of the fascination has to do with the energy that you can still feel. It is all a very good energy. The jobs were dangerous and everyone had to try to keep safety in mind and look out for each other. I swear, you can still feel THAT energy. 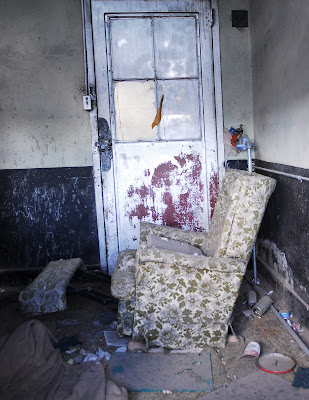 And then came that day when the gates closed for good. No more work. No more trains coming through. It had to have been pretty upsetting for those who worked there for most of their lives. 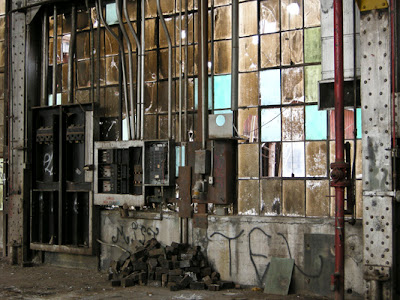 It boggles my mind that so many New Mexicans have not heard of the Rail Yard and what it once was. It played a large role in creating Albuquerque's future; how could it not when the Rail Yard employed about 25% of the city's population back then? And yet, so few are aware of the 27 acre site not too far from the city's center.
My subsequent trips there were with the Flickr group in December 2009, and again with the Enchanted Lens Camera Club in April 2010, the media meet this past March and then again last week for a short visit with Leba from the Wheels Museum.
With each visit, I still feel like I cannot get enough of this grande old place. It is under my skin.
Posted by Images of the Albuquerque Rail Yards at 11:13 PM 1 comment:

The first time I stepped foot through the gates of the rail yards, I knew there was something special to be experienced within those walls. I quietly stood admiring what surrounded me - the soaring steel beams, the grimy colored window panes, the filthy concrete and woodblock floors. In just a few moments, one could see and feel all the years of hard work and neglect that building has witnessed.

I have had the pleasure of photographing this beautiful place on  four different occasions and one visit was no more productive, photographically, than the others but my first was special for the simple fact that I was introduced to the most special set of building the city of Albuquerque has to offer. Hopefully we have not seen the last of this beauty. 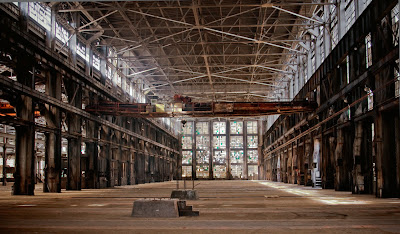 Posted by Marc Gutierrez Photography at 4:41 PM No comments:

Karl Koenig died early in the morning on January 18th, 2012 after a protracted illness. Should you choose to read about Karl and his career please read this article recently published featuring Karl and his photography.
Dona Nobis Requiem.

There are many layers
to this site. Take the time
to 'cruise' it, as it is
chock full of good
information.
Such as, videos.
Historical information.
The participants.

Perhaps cruise it
in several passes..
and don't' forget to
forward this link to
your friends, your
Face Book page,
etc.