For the first time ever, a public exhibition of images from the
Railyard as it is today. Exhibition Dates: Sept. 15-Nov. 14, 2011 At the Kimo Theater Gallery 423 Central Ave. NW
Albuquerque, NM Gallery Hours can be found listed on the Kimo Gallery site (505) 768-3522 (for gallery info)
On the home page, the most recent posts will appear first; scrolling down will take you to the older posts.

For the Love of the Rail 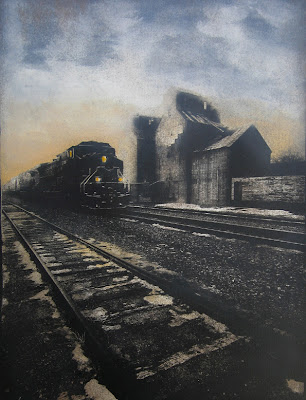 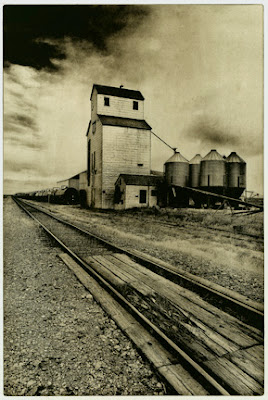 (Stirling, Alberta, Limited edition gravure etching by Karl Koenig)
No man (boy) of my acquaintance ever fully escapes the emotional pull of rail travel and the in-your-face power of magnificent locomotive engines--so rich in decibels that they shake the earth and reduce automobiles to the firepower of  house flies.

This pairing of images from the wheat field territories of the U.S. and Canada were chosen to fit a theme of particular interest to me: the historical bond between the continent's food supply and the means of distributing it quickly, cheaply and with minimum spoilage or contamination from insects and rats.

The tall, tin clad buildings seen here were an equally important innovation.  Grain was stored well above ground level.  Gravity then served as the force to channel grain to freight cars quickly and efficiently.  All of this facilitated the economic development of the midwest and to feed the millions on
either coast.

The rail systems crossing New Mexico over the years and the equipment to fix the large heavy machinery justified the Rail Yards at Albuquerque...now merely a ghost of their previous acres of buildings and track.  A trace of that past is included in the Kimo show in my hand-colored gravure of some stairs which seem to go nowhere at all.


(posted by Paula Scott for Karl Koenig. As you can see, Karl has had a love of the rail system here for quite some time. I met him at the Rail Yard during one of the Flickr sponsored events. It was cold that day in the midst of winter. We were both dressed much in the manner of the Michelin Tire guy. I approached him and we began talking about the space there at the Rail Yard. It's beauty. It's immensity and grandeur. And he told me about his process for gumoil and photogravure prints. Karl's entry to this special exhibit at the Kimo is the only photogravure print in the group-you will not want to miss it!)

Karl Koenig died early in the morning on January 18th, 2012 after a protracted illness. Should you choose to read about Karl and his career please read this article recently published featuring Karl and his photography.
Dona Nobis Requiem.

There are many layers
to this site. Take the time
to 'cruise' it, as it is
chock full of good
information.
Such as, videos.
Historical information.
The participants.

Perhaps cruise it
in several passes..
and don't' forget to
forward this link to
your friends, your
Face Book page,
etc.